Tonight, for a random reason, I logged in to a Gmail account that I don’t really use anymore. It was originally used for one purpose: to send and receive emails from a VW Scirocco mailing list. The list died a few years ago and since then I’ve only checked it a couple times each year. Usually, it’s because it occurs to me “Oh yeah, I still have that account. I’ll see what crap’s come in.” It’s mostly spam and rarely anything from any of the people I knew on the list; most of them are on FB or VWVortex anyway, so we don’t need the list to stay in touch.

Tonight, I logged in and was greeted with an email from “El T”. I had not spoken to him since last year’s Cincy (the anual trip to Scirocco “mecca”). Over 10 months. The email was only 9 days old. In it, El T said “I found something online that you’ve been looking for… for you it would unlock a serious gastronomical mystery!!” I hit the link and there it was: the cookbook from the owner of a dead Baltimore restaurant. When this place was open and I was working in Fell’s Point, I ate there 3 times a week. I always got the same order. I loved their hot sauces. I was never one for the hottest of hots, so I always got the one below it, which was pretty potent, but not too much. One day, by accident, they gave me the hottest. I was sweating profusely when I finished my lunch, but I knew that I was in love. Diablo was now my go-to sauce. Over time, I got used to it and it wasn’t quite as hellish as that first time, but still made me sweat.

One of the reasons I loved it as much as I did was that it had flavor. In my opinion, most truly hot sauces are just hot. While I like hot, I’ve never been into hot for the sake of hot. I like hot, but I don’t want it to override the flavor of what I’m eating. Diablo was just the sauce for which I had been searching all my life, even though I didn’t know I had been looking. It was super hot, but it had so much flavor behind it.

As I was a regular, I hounded the employees for the recipe. They wouldn’t give it to me even though I was on good terms with them and we had a mutual friend: El T. You see, he worked there before I discovered the place. Once I knew that, I would use his name to try to get the recipe. It still was kept from me. While they would let me bring in one large empty ketchup bottle on occasion and fill it with Diablo for a nominal fee, they wouldn’t give up the recipe. One day, towards the end of my year working in Fell’s Point, one of the cooks (and he actually looked over his shoulder before committing anything to paper) gave me an ingredient list, but no proportions. No real recipe. I think I still have it somewhere. But without proper proportions or the rest of the recipe, I never put it to use. I also now see that it was an incomplete list to boot.

About 2 years after I stopped working down there, I went by one day for lunch as I happened to be in the area. The place was gone. Closed down and the owner moved out of town. And my personal bottle at home had run out a year before (it keeps VERY well in the ‘fridge). I was distraught! I was beside myself with sadness. Never again would I taste the wonder of El Diablo.

About 6 months after that, I ran into the cook who gave me the list of ingredients. Or most of the list. He was working at a pizza joint across the street. After talking to him, he claimed he knew the full recipe but couldn’t remember it off the top of his head. I gave him my contact info and begged him to help me. I never heard from him. From time to time, I would occasionally see him around the area. I once even offered him $20 to save me. He never came through.

Tonight, El T came through. I’ve known this man for over 6 years. Once he moved away from the area (to MI and now DE), I only saw him for less than 48 hours over one weekend in early June each year. Cincy. While we are rarely in contact, we are always friends. We always have each others backs. At one Cincy, years ago, he was working on his car, on a not-quite-level section of lawn. Using a widow-maker car jack. He was slightly intoxicated. We all were. I quickly got his attention and made him sit up. While I distracted him, peppering him with questions and inane conversation, I silently directed others to place a thick piece of plywood under the jack and to put chocks behind the wheels and some other wood next to the jack to serve as a “jack-stand”. Then I let him return to his labors feeling all the better knowing that the car would not crush him if worst came to worst.

After seeing El T’s email tonight, I think his debt to me is paid in full. I like to think I saved his life that day (me and my ego). I think he saved mine tonight.

A friend is starting a big trip today. He’s hitting 48 states in an ’84 Scirocco. Supposed to take 2 months. Wish I had the time to do that, but I’ll have to be happy with a couple of cross country jaunts from the past. 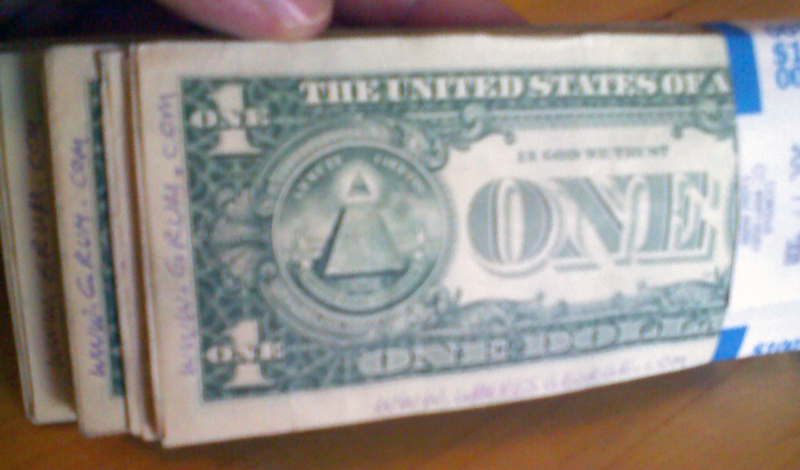 I’m making a donation to the trip fund and have tagged 96 $1 bills with my website and another. Maybe I’ll get some hits. I’m hoping he can spend 2 in each state, but it seems he’s hit Delaware before stopping by my office* in Baltimore, so DE might miss out on my money.

At any rate, it looks to be a cool trip. He’s got a laptop with a Verizon wireless device, so he’s posting from the road. Some updates can be seen here on the vortex.

*speaking of “my office,” I have a new one! I’m no longer working part-time through Kelly Services for Jhpiego. I’m now employeed full-time at the Johns Hopkins Bloomberg School of Public Health as a “Web Specialist.” This means I get paid to play with HTML and CSS. I love it when that happens! If I persue my bachelor’s at JHU part-time, I go for free! ;D While I enjoyed working at Jhpiego, I love full-time much more.

And JHSPH looks very nice on the resume!

Will some one read this? I don’t know and I don’t care. I just thought I’d start whining writing about my disc golf exploits and anything else that catches my eye. Is it shiny? I’m easily distracted by shiny objects. (not really, but it makes a great excuse whenever I’m late: “Sorry, I was on my way when I was distracted by a shiny object.”)

Why am I doing this? Well, after reading Adrian Belew’s Elephant Blog, I’ve become inspired to waste bandwidth and the time of no one (Who’s gonna read this crap???). For a little while, I’ve also been toying with the idea of keeping track of my disc golf scores, improvements, etc., so here I am. If you’re lucky and I stop being lazy, I might even blog about my Scirocco and my attempts to make it go.

Oh, I also saw The Simpsons Movie. Go see it. Good stuff. And this coming from someone who’s been a fan since the beginning and has been bored with them for at least 5 years.

Next blog: My last round at my home course: Patapsco Valley State Park in Eldersburg, MD.