Hey, I remember this blog!

I played Patapsco today. First time out there in a couple of weeks. Just been too busy during the week and playing elsewhere on the weekends. Nomads and tournaments abound!

Today, though, I shot a 68 from the Reds. One of my best rounds there. Got 2 deuces (5 and 12). But also got a few 5s, so that kind of messed things up. What I really need to do is work on my putting as missing easy putts kind of screws up the score.

After finishing 3, I was walking along the path to 4 and heard a 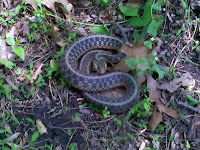 rustle in the leaves. I turned around and saw this guy sitting there looking a little miffed that I interrupted what ever he was doing. I whipped out the cell phone and snapped a pic, him hissing and snapping at me all the while.

Didn’t find Mr. Turtle, but haven’t really been looking for him. Playing solo, I tend to stay in the game and not sight-see. The only reason I saw the snake is because he drew my attention by lunging at me as I went by and made a noise.

I also think my drive might be coming back as I threw some real nice ones. Now I must work on putting (natch) and shake off the stress of competition as I seem to lose it in tourneys. Last weekend at the Seneca Screamer, I played poorly. Two weekends previous to that I played rather well at the course, so you can see my dilemma. Hopefully, I can get my act together for the Rockville Rumble on the 17th.

So, last Sunday, the day after my horrible round at Patapsco, I went out to Rockburn to get a round in before I play there this next Sunday in the MD Monthly for March. I met O and N there and they graciously let me tag along for a round. I got a nice tour of the course from O and got to see how it should be played. I can tell you it shouldn’t be played like I played it as I finished the round with 80. Eesh. At least I won’t be hitting it as a virgin this Sunday.

Also, I joined the PDGA as an Am. My first sanctioned tourney will be the Patapsco Punisher at the end of the month. Let’s hope I finish better than I did when I played the Ice Bowl (96! ouch!!) and get a decent rating. But to do that, I’ll have to avoid 7s and 11s, and I don’t have a problem with that! The recent practice has helped though and I think I’ve found a friend with the Archangel. I’ve got 2 weeks or so before the PP, so I plan to get in at least 4 rounds at P-tap before I get Punished.

So I played in 2 more tournaments last weekend, one of which was an Ice Bowl.

On Saturday, the 16th, I played in an Ice Bowl that took place on 2 different courses: Middletown and Walkersville. It was pairs, favorite disc, which is similar to best disc except that we could throw from the lie we liked best as opposed to picking the best lie and then both of us throwing from there. The first round was at Middletown and it was a nice course. Cold, but nice. My partner for this round designed the course at Walkersville, which was where the second round took place. For that round, I had a new partner (we all did). This guy’s home course was Walkersville, so it helped to have him with me as I had never played it. For that matter, I hadn’t played Middletown before either.

At any rate, at the end of the day I was tied for second to last. NOT LAST! The best part, besides the free lunch ;), was the last hole: I made an awesome putt for a birdie. Made me happy. I also picked up a Maryland Tag from Sharky: #92.

The next day, Sunday, I played in the second MD Monthly at Druid Hill. This was a singles event, so I had to carry my own ass: no partner to help. The first round was from the shorts (metals) and I didn’t do too badly. Some pars, too many bogies, and one very nice birdie on #1. The second round was from the longs (woods) and I did worse: no birdies and one double bogey. Eeesh. In the end, though, I was not last, nor second from last. I finished 4th from last! Yay me. Moving on up. This was also a Tag Match, so I gave up my tag in hopes of getting a lower one. NOT! Ended up with #93. At least it was only one back.

This week, I think I’m going to blow $40 and join the PDGA as an AM. And there’s a tourney at Seneca tomorrow, but the weather’s been crap and things are slightly frozen over. I’m not sure if I’ll play, but I want to. We’ll see what tomorrow brings.

Hello to everyone who doesn’t read this blog and I think that covers EVERYONE.

I’m back! I haven’t posted much as this was mainly a blog about my adventures playing disc golf and I haven’t played in a few months. Well, I played 2, yes 2!, rounds this last weekend. Not only that, but I also played in my first 2 tourneys evar!

The first one was on Saturday at Patapsco. It was their annual Ice-Bowl (winter DG to raise money for the Food Bank) and I had to play. I just had to. I’d been itching to play and to enjoy being Patapsco’s bitch once again. I finished Dead Last. Woot! And for the record, Patapsco was in Full Punishment Mode: all pins in “C” position.

Wait, I can explain! Started on 13 (shotgun start) and got a 7. Not good, but it was the first hole and the first time I’d thrown a disc in 4 months or more. I figured things would get better as I warmed up. Things did not go that way initially. On 15, I got an 11. Yes, an 11! The pin was sitting at the top of a steep hill (I swear it was like a 45 angle) and my 4th or 5th shot (my putt) missed. Upon hitting the ground, the disc flipped on edge and took off down the hill. All the way to the bottom and almost in the river! 4 strokes later, I was back near the top. I think the worst part of this mini-adventure was that I could still see the pin from where the disc stopped but there was no way I’d be able to get it up there without eating some strokes.

That won’t happen again, E! I can promise that.

At the end of the day, I realized a couple things:

For holes 1 and 2 (I got a 4 and 3 respectively), I came to realize that they are indeed easier than I thought. The major factor in me sucking on those holes is that I’M NOT WARMED UP when I usually play them. Hence my horrible scores on the holes normally. I mean, I PARRED 2 in it’s C position. That really told me something. So, I apologize to 1 and 2 for hating them when it was my fault all along.

The next day…
I drove down to Burke Lake and played in their Ice-Bowl with my buddy Alex. It was a “bring your own partner, best disc” match. We were to play 2 rounds: one from the longs and the second from the shorts.

The first round went OK. I think we played more of my throws than Alex’s, but that’s not the point. We (Team Boozer) had fun and we didn’t come in last.

Although I can’t find the results online yet, I know this because we were 1 stroke ahead of one of the two teams we played with. I had a couple awesome drives, but still came to realize I need to get out more and practice a few things.

After lunch, we came back to the park and there were trees down and really bad winds. Due to this, the second round was canceled for safety concerns. No problem. The last place I want to be in high winds is in the woods with dead shit waiting to fall.

It was a good day, non the less, as we had a good time, and lots of money and food was raised for the food bank.

So, that was the extent of my weekend and it’s nice to know that playing in 40 degree weather ain’t that bad. Just need to keep moving and stay warm.

Off topic, my brother was in the Letterman audience last Friday. Here he is: