Now that I’ve got WordPress running on my site, I need to make it look like the rest of the site and so the learning process begins.

Had this conversation today (it started yesterday, but the first response was today… timely!): 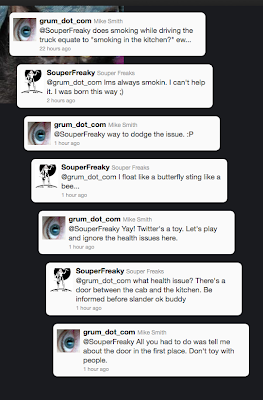 This is how you don’t use Twitter to talk to your customers or possible customers. Just sayin’.

Also, was there any slander in there on my part? I don’t think so. Was just reporting the facts as I witnessed the driver smoking while they drove the food truck by my office. And for the record, I love the food truck concept. I support them.

Fantastic presentation by Reinhard Stebner tonight. I wasn’t expecting much and but left enlightened and very happy that I went. Stebner’s presentation taught me a lot.

Much like tables (which should only be used for actual tabular data, duh), avoid bulleted lists except for things that need to be in lists: “cat, dog, mouse.” This means no lists for navigation. Divs and spans are the way to go as they’re invisible to screen readers. Stebner was tabbing through the far too many lists on mica.edu and they gave no clue as to where he was on the page and no information other than “List, 10 items. List, 6 items…” With divs and spans, the content is immediately available to the screen readers.

Content should be grouped logically with headers. H1 should start actual content. Don’t mix the order. Be logical! JAWS can tab through headers, easier to locate sections of content. JAWS can also tab through images.

Autoplay on video/audio without keyboard shortcuts for the controls is bad. BAD.

I always add them as I thought it helped, but screen readers ignore titles on anchors. I thought they went hand in hand with Alt tags on images for accessibility, but no. However, Alt tags on images ARE important. As they always were. Titles are, however, extremely helpful with form fields. Stebner went to bing.com and when the focus hit the search field, the screen reader said
“Enter your search term.” Brilliant.

Screen readers ignore HTML comments. (I should have known this.)

Use page appropriate titles that are descriptive of the page’s content. It’s the first thing read when the page loads. Ambiguous titles tell nothing about content and can be confusing.

Firebug is a useful tool for accessibility.

Thanks to Mike for making it all happen. It wasn’t that cold outside.

A huge thanks to Reinhard Stebner for the lesson.

About half an hour ago I started typing up a Facebook update. As I finished it, I realized, “Shit, this is really a blog entry. Why don’t I just copy it, paste it into my blog, add a bit of a preamble, and then post the fucker?”
That being said, let me say this (and a little of that):
I don’t remember when I started, but I’ve been listening to the audio books of Stephen King in chronological order. It’s been about 6 months. I think. If you really want to know when I REALLY started, then think on this:
I’m currently enjoying “Christine.” I’m less than 1/3 of the way and I’m in love. Actually, I was in love with it after maybe 4 chapters. I forgot how good this book is.
I had the same feeling while listening to “The Running Man,” and with that one, I had almost forgotten 90% of the story, thanks to Ahnold and Richard Dawson. It’s really fucking good. And I use that word with all sincerity.
“Rereading” the books I started reading as an early teen (and I was HOOKED then) is enlightening on so many levels.
Thanks, Pop, for handing me “Firestarter” when I was about 11. Or 12. 13? I really don’t remember. All I know is that I’ve loved horror just about as long as I’ve loved reading.
Again,
Thanks, Pop.

I’ve always been a PC person but switched to Mac about 2.5 years ago when I started my current gig. It was surprisingly easy to make the switch and I really had no complaints.

Since my switch, I’ve always hated this. I have a coworker who consistently tells me that the same result can be had by using the up/down arrows on the keyboard. “Works every time,” he says. Well, it works every time there is only one line of text, otherwise it just moves the cursor up or down the lines. Not helpful and he still tries to tell me this when I bemoan my fate.

Last Friday, another coworker clued me in, and I’m really surprised that it’s taken this long for the information to get to me. So, allow me to elucidate:

When your cursor is on a line of text and you want to jump to the start or end of that particular line, then click CMD+ (left arrow, right arrow), respectively. Simple, really, and I’m again surprised that no one told me sooner. Same functionality as the Home and End buttons on a PC.

I’m now down 60# since the start of the new year. Today I played 18 holes of golf at Patapsco ( and shot a new best of 65) and I WAS NOT TIRED AFTERWARDS. This is nice.
Read The Zone and Mastering the Zone by Barry Sears. I got them at the library and blasted through them in less than 3 weeks. Once you read and understand what’s going on, you’ll wish you had learned this 15 years ago when the first book was published. The fat will melt off and optimum health will follow.

So I was looking at the Analytics for yesterday’s post and there was one hit from the following network:

adobe systems inc.
I’ll bet the typo is gone in the next Fireworks update. Just goes to show you, they are listening! It’s nice to know, too. Just as long as it’s not . Shhh!

It’s not a huge deal. Hey, mistakes happen all the time. I’m just surprised to see it happen in an Adobe product, as polished as they like to be and considering how much one has to pay to use the damn things!

I was in the preferences window for Fireworks CS4 (Mac, and at work), just looking around, when I moused over a check box and there it was. I did a double take. I moused over a couple more times to be sure it wasn’t me. Nope, not me. There is, indeed, a typo in Fireworks CS4! Ha! I love it.

Did a quick Google search and it looks like I might even be the first to notice. Although, given the number of Geeks in the world, I’d be surprised if I really am the first. Either way, it’s kind of like an Easter Egg for me.