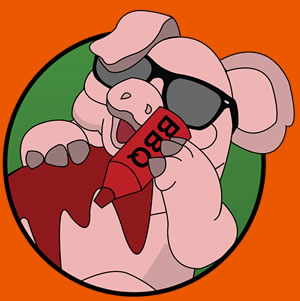 Hogback Mountain BBQ: My brother-in-law has a competition BBQ team. They've won some awards. After the work I did for him on Suds & Honey, he asked me to create a logo for the team. Like the other project, he had some ideas already in mind. I made them come to life.

He originally wanted a pig sunning itself in a field and using BBQ sauce as tanning lotion. In the background would be a smoker/trailer and the team hiding behind ready to pounce on the pig. I put it together in Illustrator and sent it over. Neither of us was happy with the field, smoker, or the team, but the pig rocked. So, I pulled it out and made the logo you see here. It even got some press. It scored 3 (out of 5) nooses!

In recent news, I've made several versions of it in different sizes and background colors in preparation for stickers and t-shirts. I also made a 2 color version (orange and black).